At the Seventy-second World Health Assembly (WHA) that took place from May 20 to 28 in Geneva, Switzerland, delegations from all World Health Organization (WHO) Member States discussed approaches to promoting global health.

Governments’ focus on the need to invest in strong health systems and a variety of preventive services should not outweigh the need to start investing in proven population-level health interventions.

To see one billion more people enjoying better health and well-being, and to achieve the Sustainable Development Goals, which include a call to reduce deaths from noncommunicable diseases (NCDs) by one-third by 2030, governments must commit to cost-effective policies.

Tobacco use is a major risk factor for NCDs which account for an estimated 41 million deaths each year, 71 percent of the 57 million deaths worldwide. Fighting the tobacco epidemic must therefore be a priority for governments and the world’s public health community.

In the Report on the Implementation of the 2030 Agenda for Sustainable Development, Dr. Tedros Adhanom Ghebreyesus concluded that progress towards implementation of the various articles of the WHO Framework Convention on Tobacco Control (FCTC) remains uneven. This is the case for many reasons including the lack of sustainable financing for tobacco control. But a roadmap for effective action is now available.

The highest levels of governments can take urgent steps to accelerate progress on tobacco control by implementing the priority measures outlined in the Global Strategy to Accelerate Tobacco Control 2019-2025. Through the Strategy, governments can deepen the integration of the FCTC into the world’s sustainable development and financing agenda.

In a report submitted on behalf of the Eighth Session of the Conference of the Parties to the WHO FCTC (COP8), the Head of the Secretariat of the WHO FCTC and The Protocol to Eliminate Illicit Trade in Tobacco Products (Convention Secretariat) notes that the adoption of the Strategy was one of the most significant outcomes of the session.

During discussions on this agenda item at the Assembly, a number of Member States that are Party to the FCTC spoke up to voice their support for the Strategy, with a number reaffirming their commitment to implementing the FCTC and the Strategy.

There were calls, in particular, for the WHO to work together with the Convention Secretariat to implement the Strategy, and for the WHO to provide technical assistance where possible to support Parties’ efforts.

In his opening remarks to the WHA, Dr. Tedros Adhanom Ghebreyesus, Director-General of the WHO acknowledged the importance of the Protocol when he stated: “If your country has not yet ratified the Protocol, I urge it to do so as soon as possible.”

The main provisions of the Protocol include a global tracking and tracing regime for cigarettes, due to be in place in 2023, and effective controls on manufacturing and transactions in tobacco products in free zones, to be finalised by 2021.

To fight the tobacco epidemic, governments can immediately add the Protocol to their toolbox through ratification.

FCA at the WHA

On the margins of the WHA, FCA consulted with key global health actors and participated in a number of important meetings.

FCA advocated for the importance of investing in cost-effective preventive measures, particularly the scaled-up national implementation of the FCTC provisions, which can help lower premature NCDs mortality and achieve the health targets of the Sustainable Development Goals.

One of the biggest investments that governments can make in preventive services is to increase tax rates on tobacco products. Price and tax measures are effective at reducing tobacco use prevalence, and can create the needed fiscal space to finance UHC and other aspects of sustainable development.

FCA is encouraged that the zero draft of the Political Declaration of the High-level Meeting on Universal Health Coverage (UHC) recognises “the importance of progressive tax systems and notes that the price and tax measures on harmful products, in particular tobacco and alcohol, are an effective means to reduce consumption and related health-care costs and represent a potential revenue stream for financing for development in many countries.” 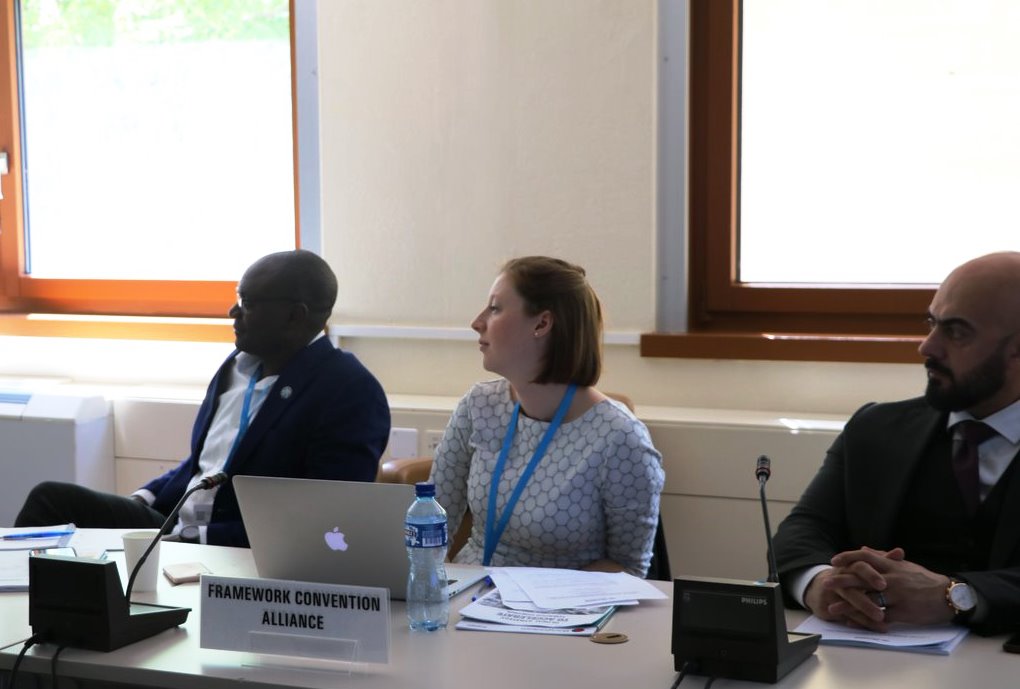 From left to right: Tih Ntiabang, Ryan Forrest and Dr. Hani Al Goumanih during the meeting between observers to the COP and Convention Secretariat. Photo: @FCTCOfficial.

Along with other non-governmental organisations accredited as observers to the Conference of the Parties to the FCTC, FCA met with the Convention Secretariat to review and promote collaboration towards implementation of the FCTC around the world.

FCA notes that tobacco control now falls under the remit of the Division of UHC/Healthier Populations.

In his closing remarks, the Director-General of the WHO presented his vision of a world where “the tobacco industry goes out of business because no one wants its products