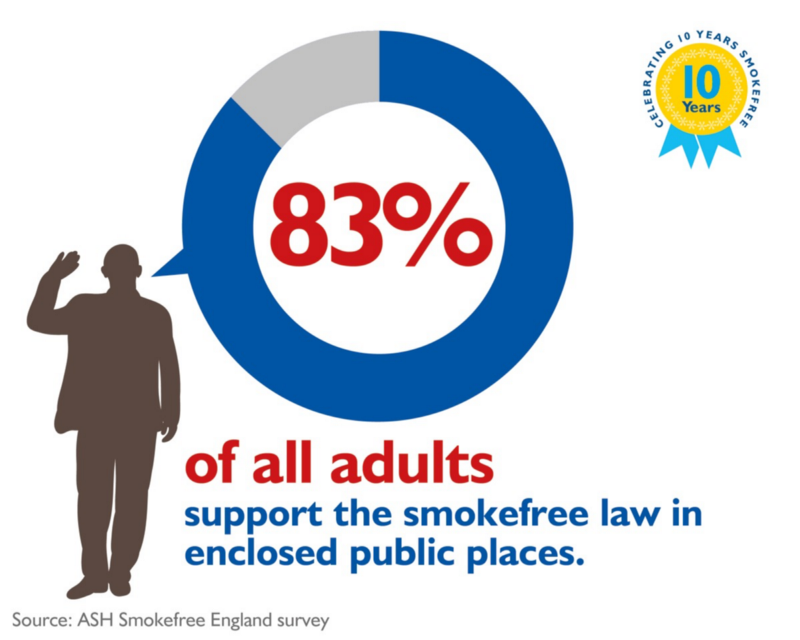 Like a lot of students I worked in a bar to help pay my rent. Not a bad job, it fitted in with my studies and was flexible. But what I didn’t like was getting home gone midnight, exhausted, with my hair and clothes stinking of tobacco smoke. I’d wake up the next morning and my sheets would smell of it too. So years later, when I was recruited by ASH with the primary aim of getting legislation to prohibit smoking in enclosed public places, I wanted to make sure pubs, bars and clubs were included.

The first step was to shift the debate from the rights of smokers to the rights of workers, rights to clean air and protection from the harm caused by secondhand smoke. We put together an alliance of leading charities like Cancer Research UK and the British Heart Foundation, medical organisations like the Royal College of Physicians and the BMA, public health bodies such as the Chartered Institute of Environmental Health and regional organisations like Smokefree Liverpool and Fresh Northeast.
Together we worked to engage the public, parliament and the media, and work it did. In England between Spring 2004 and the end of 2005 support for smokefree pubs and bars rose from 51 percent to 66 percent.

It seems obvious now, but it wasn’t then, that smokefree laws would be widely supported, and that support grew once people understood the evidence. Public support for measures to tackle smoking has continued to grow since the legislation was passed, particularly among smokers. Back in 2007 when smokefree laws in England came into effect, 78 percent of all respondents to the survey were in favour of the legislation. In the 10 years since, support has grown to 83 percent, primarily due to an increase in support from smokers from 40 percent to 55 percent. The overall change is entirely due to changing attitudes among smokers: support among non-smokers has been stable.

And the public is right to support Government action to limit smoking. I was still a social smoker when I started working for ASH. I didn’t smoke regularly, but every few weeks, after a few drinks down the pub, I’d buy a packet of very expensive cigarettes from the pub vending machine, and wake up the next morning with a hoarse throat regretting it bitterly. Working for ASH did the trick for me and I finally quit forever, but not everyone can work for ASH!

Most smokers want to quit, but it’s a serious addiction and they need help and encouragement. There are still 7.6 million adult smokers in Britain and nearly 100,000 people die from smoking every year, losing many years of productive life. Despite smoking rates having dropped to a record low in England, smoking remains a public health epidemic, the leading cause of preventable premature death, with hundreds of children under 16 starting smoking every day.

We have to stop this epidemic. The evidence of the last decade is that measures to limit smoking are popular and effective, when they are part of a comprehensive strategy and are properly funded. Today is the 10th anniversary of the implementation of smokefree legislation in England — and by now we had hoped to see publication of the next Tobacco Control Plan, with a commitment to delivering a smokefree future for our children. The best way for the Government to prove its continuing commitment to public health and tackling tobacco is not just to talk about it but to publish the new Plan without further delay.

* Deborah Arnott is Chief Executive of ASH. The above is an excerpt of an article that was first posted online on 1 July 2017.